Since the first re-union, in 1988, we have presented a garden bench to a sheltered housing community in Kirkham; in 1994 we raised £235 for the armourers from RAF Laarbruch who walked 1,200 miles in aid of the British Junior Sports Association for the Disabled; instigated “Project Plumber’s Aid” – in conjunction with all serving armourers, which raised £15,000 for the Cade Cancer Unit at RAF Halton. Since the hospital closed before the money could be presented, the £15,000 was donated to Richard Peck House where it was used to renovate the lift for disabled residents of the home. We have also donated money for the purchase of an orthopaedic bed to be placed at Richard Peck House.   The cash for our charity donations is raised painlessly by involvement of the members at a “bit of fun and games” we have usually on the Friday night of the re-union weekends. We also try to ensure that our “significant others” are fully catered for in everything that happens. 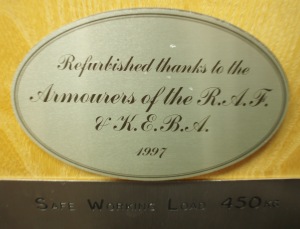 Plaque in Richard Peck House after refurbishment of lift 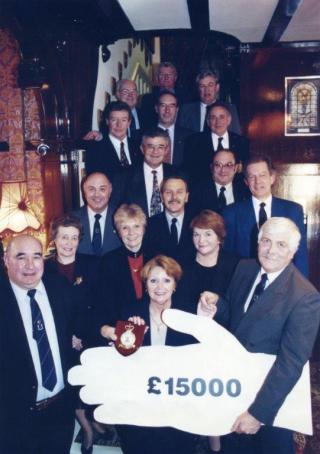 This was the presentation of the £15,000 cheque to Richard Peck House at St Annes on 10th February 1997.
People present, From the back left to right, …..? Ken Hillman, Trevor Caine, Mike Moore, Mike Halpin, Fred Knox, Chas Challis, Al Silsby, Colin Fosberry, Frank Deegan, Eric Cutbush, Mrs Hillman,……..? Mrs Symonds, Matt Macintyre, Ann Mulvey,and Peter Symonds.  Only two people unknown, the gent at the back with glasses and the lady in the red top